“The main components that make up an SD card are the controller IC, the firmware it runs and the NAND flash,” said Paul Plitzuweit, Senior Product Manager for the Datakey line. “With consumer SD cards, these components can change from lot-to-lot, resulting in varying levels of performance and reliability.”

The new Industrial DFX memory tokens are available with either Multi-Level Cell (MLC) or Single-Level Cell (SLC) NAND flash. SLC NAND flash has several advantages over MLC NAND flash, which can be important in some applications, including:

Faster Write Speeds
With only a single bit being stored per cell for SLC, there is less logic required to write to a cell as compared to MLC, which stores two bits per cell.

Better Unpowered Data Retention
For applications where there will be long periods when the memory device will be unpowered, SLC NAND flash will provide longer data retention. This is especially important if the device will be stored in a high temperature environment. 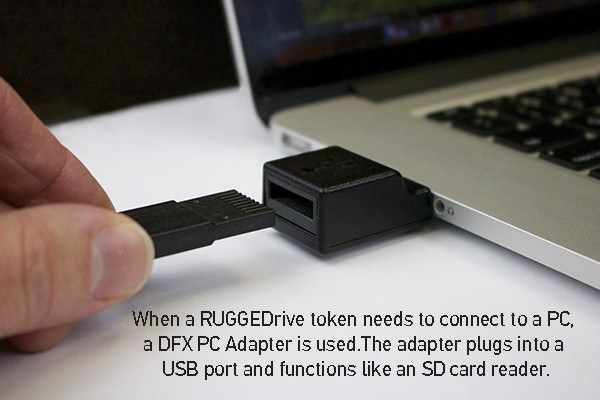 First launched in late 2010, the RUGGEDrive line gives embedded systems designers a more rugged and secure alternative to consumer USB flash drives and SD cards. The proprietary shape of the RUGGEDrive memory token prevents it from plugging into standard ports. Instead, RUGGEDrive receptacles are used on the embedded device. This prevents unapproved devices (like USB flash drives or SD cards) from connecting to the system. The RUGGEDrive token also utilizes solid over-molded construction, making it many times stronger than traditional SD cards (see destructive testing video).

Stop by the Datakey booth (#4A-351) at Embedded World to see new Industrial RUGGEDrive products and follow Datakey on Twitter for updates using the hashtag #ew17.

ATEK Access Technologies, LLC is part of the ATEK Companies group of technology and manufacturing businesses. Its industry-leading brands use the power of advanced machine-to-machine (M2M) technologies to provide customers access to superior efficiencies and savings, essential data and systems, improved safety and control, and expert solutions and support. Its brands include Datakey, Larco, TankScan and AssetScan. For more information, visit www.atekaccess.com.